Nwokolo was born in Lagos in 1963. He seemed to have set his mind on art from an early age. By his teens, he was a regular at the National Theatre Lagos, painting club.

He enrolled at the Federal Polytechnic, Auchi in 1986. The art school was relatively new, run by young artists and academics. This meant an easier connection between teachers and students. It also meant the school was free of many of the traditions that would guide and, maybe, constrain students in the older Nigerian art schools. Nwokolo excelled in this environment, and gained a reputation for his bold colours and imagery. He received the Rector’s Certificate of Excellence and the American Ambassador’s Award in 1991 while in Auchi.

Nwokolo left Auchi in 1991 to become a full-time studio artist in Lagos. By this time his bold, bright artworks had become something of a trademark style. It was also the beginning of his movement towards theme-oriented artwork. Perhaps his earliest theme was the Lagos rooftops. His rooftop artworks captured the symmetry and restless energy of the expanse of rust-brown Lagos rooftops.

His other themes have included cathedrals, forests and Lagos party women. Through repetition, he finds clarity, each artwork is a further unfurling of the theme – until he is done and moves on to the next theme. His art seems to derive directly from his persona. The man, Nwokolo is restless, hyper-active; a rapid talker with an acute mind. 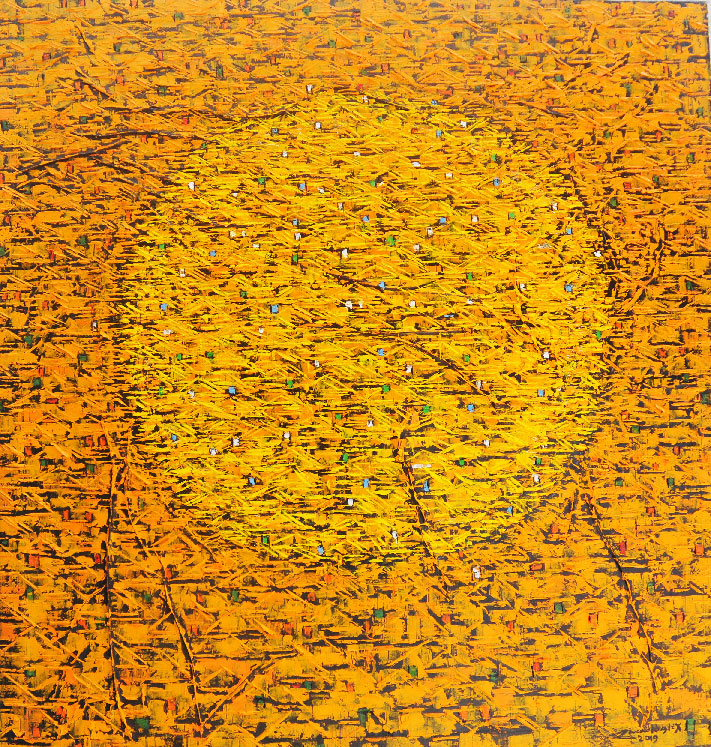